My Profile Picture: Sharyl Weinshilboum, the Enduring Miss Frost, and the Watergate Trials

Dear Reader -  I've been getting several inquiries about my profile picture. Everyone asks who the little girls are:

The one to the left is a third grade me, giggling up a storm with my best buddy from that year, Sharyl Weinshilboum, on a Girl Scout trip to Joyland in Wichita.

I loved Sharyl. I loved her wit and her creativity and her daring. And we had a blast and a half in third grade, coming up with one wacky project after another, like the intricate miniature animal display that we created for a school-wide fair; or the "Thom Boys Club" that we established in my back yard, replete with a big ol' used tire of my daddy's that we half-buried in the ground to be our club house's toilet (yep, everybody had to do something interesting in the tire in order to be in the "club"); to the extended election campaign that we organized, pitting two of my largest stuffed dogs against each other and getting kids from all the grades at recess with us to vote on which one they thought was "best" (oh, heavens, we talked poor Steven Rudy into being the campaign manager for "Big Snoopy," who was roundly trounced by my man, "Big Greeny"); to the time we both came home from school completely coated in mud after having thrown it at each other for a good, hilarious half hour or so, ruining a ball diamond in the process.

Like I said, we had a blast and a half.

But then came fourth grade and Miss Frost.

Miss Frost had been a fourth grade teacher at Lincoln Elementary since the beginning of time.

Miss Frost had been Sharyl's dad's teacher, so we knew she was really, really old. And while she turned out to be my fourth grade teacher, she wasn't Sharyl's, which was a sad thing for me. You see, Miss Frost started every day off with the Lord's Prayer, and Sharyl's dad made sure that her little Jewish soul didn't have to endure it as he had.

Miss Frost was sweet. She was the kind of teacher who bought a box of Girl Scout cookies from every girl, who never, ever got pissy, and who always came up with simple, enriching things for us to do (I still remember being "Juanita" in our makeshift Spanish class). I loved her, and of course she loved us, too - heck, I still have the note she wrote to me when I graduated from high school - what a dear. 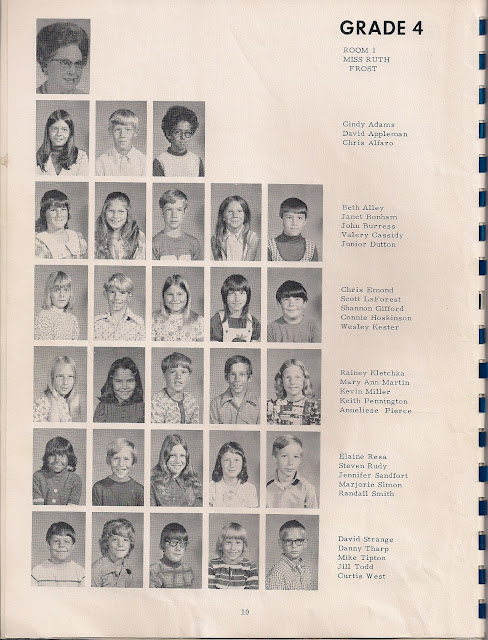 Miss Frost was also the kind of teacher who stopped to answer most any question that we threw at her.

Well, it was 1974, and Gilligan's Island, I Dream of Jeannie, and Mr. Magoo had all been preempted in their after-school timeslots by the Watergate trials. I remember going home, turning on the television with its four stations and finding every single one of them trained on these seemingly deadly dull conversations. So one day I up and asked her what it was all about.

Miss Frost, of course, took the time to explain it in detail to us. She said that cities in the Middle East were built with walls surrounding them, and that there were gates in the city walls for various purposes. She reminded us that the Middle East was very dry and that water was a hot commodity, and she said that there was always a water gate in each city where they brought the water in. And the trials? They, of course, were about a water dispute in the region.

I was thrilled, finally knowing what all the fuss was all about. I went home, turned on the television, and immediately made up a song about the whole affair - dancing around the basement, standing up on the cabinets at the back of it to look out with a sense of power and knowing at the big cedar gate in our back yard. It was a happy day in Jennyland.

Sharyl moved away after fourth grade, and I think that I only got to see her once after that. Imagine my delight when I searched for and found her on the facebook thingie - just feels happy to know that she's still there, now with three gorgeous and impish-looking children of her own!

All of these 1974 remembrances got me to thinkin' about the music of the day. I remember that, like my Watergate ditty, I was more than a little fond of the story-telling songs. And these three flew to mind, along with the Grand Funk Railroad number (which sticks with me since I wrote to them in third grade for a class project and got a really cool fan packet back with a dozen 8x10 glossy photographs [I thought that was cool, but it didn't come close to the handwritten note that Keven Miller got back from Billie Jean King]).

I don't need to say anything more about these songs, Reader - they (and their grooming/fashion) speak for themselves.