The Wilds of Hospitality, or Cream Puff?

Dear Reader -  I first learned of Hospitality Night in legendary terms in advance of last year's event. You'd think that inviting our regular guests, as well as our friends and neighbors here in Lewes in for a little touch of something at the holidays'd result in a heapin' helpin' of that sweet, small-town-Americana-run-amok-ish-ness that we've all come to love here. The kind that's exemplified in this beatific photo from the Cape Gazette of my fellow shopkeeper Maureen down at Aquamarine: 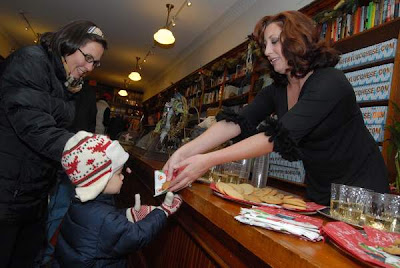 But my colleagues on Second Street terrorized me with tales of gauche, greedy, often thieving hordes (literally hordes and hordes of people). I have to admit that I was kinda unnerved by the prospect. For instance, one shopkeeper had a tradition of serving homemade meatballs each year, 'til someone showed up in the crowd with a Tupperware container and proceeded to fill it. Another told of how they'd been robbed blind the first year they did it, so they've since learned to remove their valuable merchandise from the floor.

Trampling and breaking and spilling, oh my

This image from the bonfire tradition in Lewes, England somehow seemed more apt: 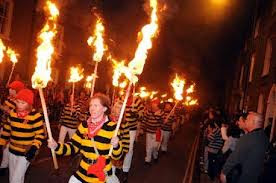 But rather than running willy-nilly into the streets, wailing and decrying tradition, this, dear Reader, is when my penchant for control issues came in handy. I quickly stepped back and realized that we are a bookshop - we sell things made of paper. Paper does not do well with liquid, so we decided not to serve any. I also recognized that self-service is for gas stations and buffet restaurants, so our offering would be individually served.

Then the question was, what to offer? I remembered my days as a development director at Yale and the horror that was the mini-spanakopita. Good heavens! They served that most socially inept of all noshes at every darn cocktail hour in the 90s: 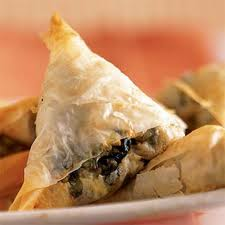 The mini-spanakopita had multiple problem points:
I could not inflict anything remotely mini-spanakopita-ish on biblion's guests - hordes or no hordes - it just wouldn't be cool. So I regaled Ingrid with my spanakopita exploits at Yale, and she had the perfect solution - the mini-cream puff: 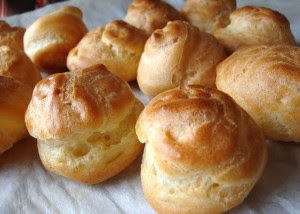 The mini-cream puff is a lovely food. It's a perfect bite. It's sweet, but not over-sweet. It has an appealing blend of textures and temperatures. And it's socially simple, since (nearly*) everyone knows what a cream puff is all about.

So we put Ingrid just inside our front door, greeting each guest with a friendly offer of, "Cream puff?"

Once inside the guests were delightful, as our guests typically are. They had a blast giggling together over our cards and gifts, finding fun things for many of their friends and family members. And we had a blast with them. It was a lovely, evening, and we're looking forward to it again this week on Thursday night from 6 to 9.

So come down, enjoy the music-filled streets, sit down with Santa, visit our nice array shops, and stop by for a little cream puff on us!

* We did have one guest who was a little baffled by the puff. She shyly asked Ingrid what was in it. "Cream," Ingrid smiled in reply.

P.S. We've gotta have some tunage to go with this. Speaking of the 90s, let's go with Aaron Neville's Christmas album from that vintage: