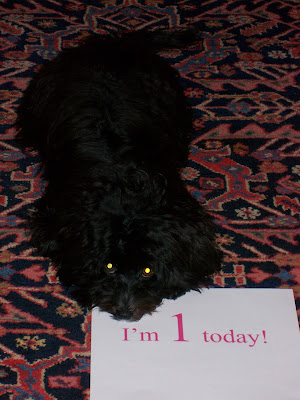 It's hard to believe that she's only been with us for these few, short months - she feels so much a part of our lives here at biblion and Casa J&C.

We're celebrating the day with a little "sale" in her honor - giving an extra 5% off to anyone who spends $21 or more!

Here's the first picture I ever saw of Nellie (she was Penelope then - safe in the arms of her breeder, Candice Kane): 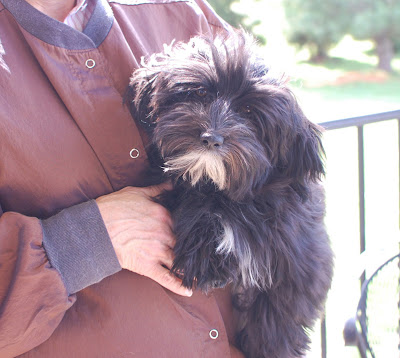 Her eyes turned out to be just as compelling in person, if not more so - and, as you may remember, it was her eyes that brought her to us, as mentioned in my first mention of her back in June (what kind of insanity makes a newly-minted retailer decide to get a puppy just before the resort summer hits, and then to save that darn kitten to boot? - ah well! - Nellie and Spot have become the best of friends, wreaking havoc on our household [and especially the other cats {yes, I'm in danger of being dubbed a crazy cat lady, gone beyond my two-cat minimum - I've decided that because Miss C and Nellie are part of the equation, we haven't tipped the scales, yet}]).

She has turned out to be an awesomely awesome shop dog, save for her tendency to bark (okay, she yaps, it's embarrassing really; we try to tell her that nobody likes a yappy dog - that it's simply unattractive - to no avail) at other dogs. Here's a shot that I took of her with my iPhone to share with one of my card reps the other day. She spends most of the day sleeping under my desk, coming out to greet the guests who want to be greeted: 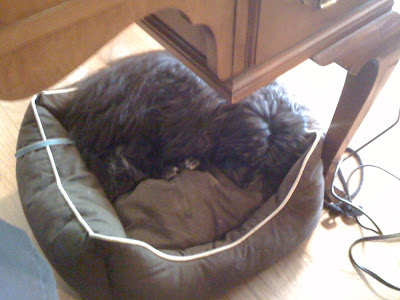 So, stop by if you can and join us in wishing Nellie a happy, yappy birthday! 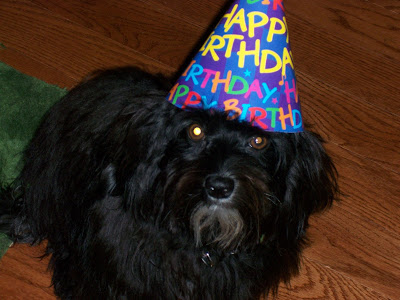 A worthy reason to get back up on that blogging pony, sister!

Dear Reader -  I've missed you. And I feel like my life's awash in a sea of biblion stories that're just aching for a place to funnel 'em.

But what's brought me here today is the 10th anniversary of the start of our War in Afghanistan, an action precipitated by the attacks less than a month before and followed up a couple years later with the Iraq War.

Right about the time of the art show this summer I received an email from a local author named Terri Clifton:

Hello. My name is Terri Clifton and I am contacting you about the book A Random Soldier.
My son Chad was a 2003 graduate of Cape Henlopen High School. He joined the Marine Corps that summer and went to Iraq in 2004. Before he left he made me promise to tell his story if he didn't make it home. Chad was killed in action in February 2005.
I wrote and self published his book, but have only in the past year regained the energy it takes to attempt to bring the book forth. It is available at Browseabout but I stumbled across your store (while having dinner with my husband at Agave) and wondered if you would be at all interested. Both Chad and the book are easily googled.
Thank you for your time,
Terri
I totally remembered her son. biblion's Memorial Day commemoration included pictures and brief bios on all of the men and women from Delaware who'd been lost in the wars in Afghanistan and Iraq, and Chad's strikingly youthful face was hard to forget:

I also remembered how the young people at our church were devastated the day that we heard of his death.

Terri and I eventually connected after the fray of the art show, and I immediately began carrying her book (it's worth noting that Terri is not selling her book for profit - she's just looking to cover her self-publishing expenses - to that end, biblion isn't profiting from it either). As Terri'd mentioned, she hadn't yet put much energy into marketing the book, for understandable reasons, and I began noodling on how we could do more to get Chad's story out than simply having it out in the midst of our shop.

And then it hit me, the tenth anniversary of September 11th was coming up and, of course, the Afghan War started shortly after. Sure enough, I went to Google it and found that October 7 was the date. Given that the "drumbeat" of 9/11 anniversary coverage was already audible this summer, I expected that the media'd have a field day with the war. As such, I thought that a low-key reading by Terri would be a nice counter-point to all of the Sturm und Drang of the politicized coverage on the 24/7 news networks.

Boy, did I turn out to be wrong.

At first I thought that the fact that I wasn't hearing anything about the anniversary was because I'm watching/listening to the news so infrequently these days, caught up in the Sturm und Drang of the happy fray of my own little life. But then I started doing Google searches and found virtually no mention among the major news outlets. Thousands of lives lost, tens of thousands of lives shattered, and no words.

Terri agreed that doing a reading on that date seemed apropos, so we put it on the schedule: 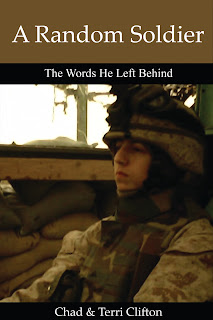 What I love about Terri's book is that it gives the reader a direct, unfiltered, and unapologetic perspective on one soldier's experience of war - and likewise some sense for what it was like for his family and friends. Since I didn't have any personal experience with war myself, having no friends or family who'd served, I found Chad's words and Terri's reflections truly enlightening and compelling. And from what I've seen at biblion, those who have served or been part of military families have had a different experience with the book, often finding it to be a bridge of understanding between the service members and their stateside families. I also love that there's absolutely no political agenda in it - no romantic war-related ideals, no anti-war drumbeats. It's just about a young soldier and the people whom he loved: 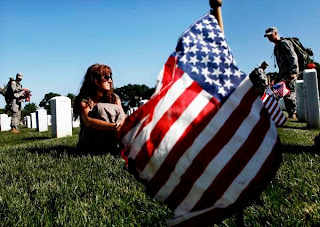 So it you have a pocket of time on Friday evening or Saturday morning, come on down and mark the day with us at biblion. We'd love to see you.  - Jen

P.S. I've had an issue with getting the word out about this earlier in the Cape Gazette (got the wrong deadline from a new guy, per Bernadette), so I'd appreciate anything you all can do to help folks know about this - I think that Terri's words could be a real help to many families as they live the realities of war.

P.S.S. I thought I'd find a way to work Chad's dad into my stream of consciousness-ness above, but the flow took another path. That being as it is, I still wanted to share Rich's incredible work with you - seeing that he has two such creative and extraordinary parents speaks to how much we've lost in losing Chad, too. Rich is a nationally-know wildlife painter: 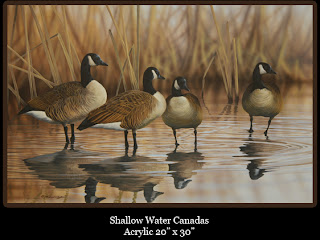 You can see more of his work here at www.RichardCliftonWildlifeArt.com.