Dear Reader -  Well, it's been an interesting week, with a wee bit of extra texture to add to the girl-starting-new-business-while-running-old-one-and-gearing-up-for-the-large-special-event-that-she-runs energy! 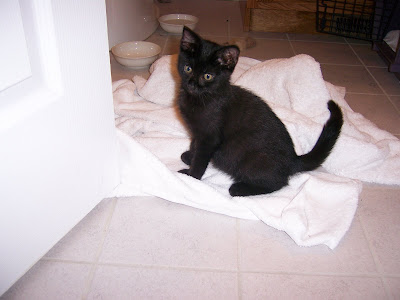 Miss C and I have named her Spot. Why?

When I was driving back from (the awesome) Canterbury Used Furniture in Felton with my new filing cabinets last Sunday, I was cutting over Fourth Street between New Road and Burton, heading through a little stretch of woods. A bit of movement drew my eyes to the right, and there I saw a tiny black spot hopping into the dense undergrowth: 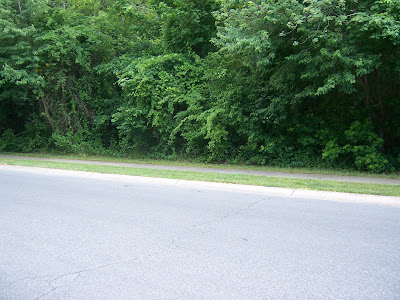 A kitten! A kitten that appeared to be all alone!

I quickly pulled over, put on my hazards, and went to peer into the woods. Sure enough, there she was. Not a minute later, a Lewes PD car stopped by to ask if I was okay, I explained that I'd just seen a little kitten, thinking maybe the fellas'd help me find her, but they just nodded and went on their way.

As the kitty had hunkered down in the brush, looking pretty darn terrified and not the least bit interested in my heeere-kitty-kitty-kitties, I decided not to lumber after her into the woods, sensing that that'd be counter-productive. As I crouched at the edge of the woods, a few more cars slowed as they passed, some folks warily asking me, "are you okay?" I explained about the kitten, watching her sink further into the woods with each encounter.

I then decided that food might be the key. So I told her I'd be back, hopped back in my Pilot, and headed around the corner to get some food at the house. I dumped all my stuff in the entryway, grabbed an old plastic Chinese takeout container, filled it with some of Midnight (Miss C's kitty that Santa told her to rescue in first grade) and Sinai's (the "transitional object" that Miss C's dad and I rescued in 1993 or 4 [I can never remember]) food. I headed back over, shook the food bowl while reciting my heeere-kitty-kitty-kitties, and the placed it at the edge of the woods.

I proceeded to plop onto the sidewalk, keeping my distance and giving Spot some calm space and time to approach the bowl. I sat there for awhile, fielding the inevitable "are you okays?" that came my way. And then I glanced up and saw what appeared to be someone walking their little Yorkshire Terrier straight down the sidewalk in our direction.

"Crap!" I thought. "That's not gonna help get this kitty outta the woods at all!"

But then I did a double-take and realized, while I initially hadn't seen the dog-walker, I assumed they were obscured behind one of the trees along the sidewalk: 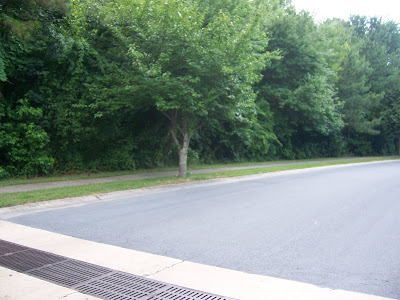 But in that double-take I realized: that darn dog was walking down the sidewalk all alone! I looked over at the kitten, creeping toward the food bowl, I looked over at the dog, blithely walking our way. "Really?" was the only thing that went through my little head. Utter dismay.

I hopped up and headed for the pooch, immediately motivating it to pull a u-turn and head back down the other side of the street. I moved quickly down the street after it, trying not to send it in to an all-out freak-out mode by running madly. I did however, start to flag down the cars heading towards us, not wanting them to squish the little doggy. The first car stopped and the woman in the passenger seat hopped out.

"I have no idea who's dog this is," I cried out. "Oh my gosh!" she replied. We proceeded to corral the dog, and she grabbed her. "We're just on our way back to D.C.," she said. So, of course, I took the dog, glancing wistfully back toward the cat, wondering what in the heck I was gonna do. I asked a few other folks out for walks if they knew the dog, to no avail. Then I pushed the food bowl a little further into the brush, so that a passing dog wouldn't get at it, and the dog and I hopped into the car.

The "what the heck am I gonna do" thought went through my head again, as I knew that my vet's office wouldn't be open to check if the dog was microchipped. Then it hit me: we keep an extra kennel at the shop for Nellie, so I decided to head there. I stepped on the gas and drove in that direction, swerving around one of the out-for-a-walk ladies that I'd seen earlier who was stopped chatting on the side of the road with a passing pickup truck.

And when I was about make the next turn it dawned on me: "I bet those people were asking her about the dog!" I swung back around and gunned it back to the woman, swerving over to the side of the road and asking her, "Were those people looking for the dog?" (the dog snugly tucked under my left arm). She said, "Yes! I just sent them back to where I saw you last!"

Off I went, the dog and I driving like mad women after the truck. We finally managed to get their attention. I hopped out the car, running up to ask them, "Is this your dog?" "Yes!" the man cried! "Her name is Precious!"

The man's name was George, and, being a very kind man, he immediately wanted to help me with the kitty. I was a little concerned, remembering how she cowered with each additional visitor, and, sure enough, she kept sinking deeper and deeper into the woods. I tried for quite awhile, and then I mentioned maybe giving it a break. George had a super suggestion: just leave a little food for the kitty, in the hope that it'd return for more. So I shook a few kibbles out into the lid of the container and took off for home, realizing that Miss C'd probably be pretty worried by now. I'd been gone a long time, and my cell phone was sitting in the entryway being of no use.

I stepped in the house and told her all about it. She, of course, wanted to come and see. We gave it a few minutes, and then we headed back over: Miss C watching from the car, so as not to further spook the kitty, and me with my food-shaking and my heeere-kitty-kitty-kitties on the sidewalk. We tried a couple more times to no avail, and then we went home to feed our pets and hang out for a bit.

At 9:00 I headed over to the shop to close'er up (at some point in the earlier process, I don't even remember when now, I also ran over to the shop to get the extra kennel, thinking we could put the kitty in it, if we caught her - Grace was already there for her shift, so I told her about the kitten, and then I ran into the our beneficent landlord, Mr. Ted, at his liquor store [I felt that the occasion warranted a glass of something interesting] - he said that he might know someone who'd be interested in her [to my great relief]).

I sent Grace home, since she was feeling a little punk, and I had folks 'till 10:00, so I didn't get back to the woods to check on the kitty 'till pretty late. I called and called. No sign of kitty. I climbed back into my car, pointed it toward home and stopped dead as I saw the little black spot, hopping at the edge of the brush - I tried calling her again, she meowed in reply, but she stayed put. I finally gave up for the night.

Monday morning I woke up to pouring rain. My first thought: Oh no! The kitten! I grabbed the little dish of food and headed over straight away. I got soaked through, calling out my kitty-kitty-kitties, and fielding a few "are you okays?" No sign of the kitten  - no sightings, no meows, nothing. A woman walked by, asking if I was okay, and when she heard about the kitten being out all night said, "You live in this neighborhood, right? And you know how many foxes we have?" Images of little tufts of black fur being left behind on the floor of the woods came to mind. I was crushed, thinking that I may have given up on her too quickly the night before. But I couldn't dwell on the possibility: it was a work day, and I had to head back home to get Nellie and myself ready.

When the clock struck 5:00, I dropped Nellie home and headed back. What did I find? A little spot curled in a ball next to the little food bowl! I brought the new food out to her, shaking it gently and trying to coax her further out of the woods. She made it all the way to the bowl a few times, but she was far too wary to let me get anywhere near her, basically inhaling the kibble just a quickly as she could.

I heard a car pull up behind me - a husband and wife on their way out to dinner with friends. We chatted for a couple about the kitten, and then the woman said that she had a no-kill trap. She said she'd get it to me on Tuesday, to which I said, "Thank you! But I'm kinda concerned about the foxes . . ." She replied, "We'll be right back."

Her name was Jackie, and she brought a little wire cage/trap, some newspaper to line it, and a can of food to entice her in. It didn't take but a minute or two for the trap to do its job. And the poor little kitty was terrified. I quickly snatched her up and popped it in the car with me. She looked at me with fear and accusation in her eyes - she'd just started to sorta trust me, and I'd completely betrayed her. I took her back home, got her situated with food and water and a litter box in a spare bath.

As you can see from this picture, dear Reader, it didn't take Spot long to learn to trust me and Miss C again: 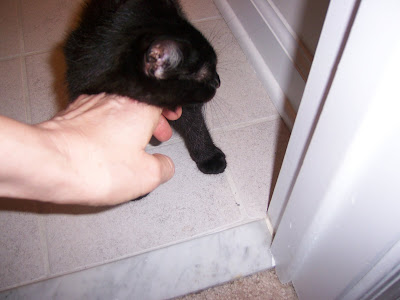 She was particularly magical with Miss C as she removed over 20 ticks from her little skin-and-bones frame. The poor little thing. She just lay there, still as a stone, purring away, letting Miss C do away with one tick after another.

I came to learn that Jackie was actually the person that Ted had in mind for the kitty, since she's a leader in the active cat rescue movement in Lewes. She has provided us with milk for the kitty, as well as her worm medication, and an offer to "fix" her at next to no cost and provide her shots. Jackie's been a Godsend. She also told us a series of horror stories of folks who've abused cats (some intentionally, some unwittingly), cautioning us to be very careful about finding her a new home.

We're looking - figuring that her right home will find us soon (Miss C's conditions are the she get to visit Spot and be her catsitter). Until then, we love Spot. Truly  - Jen