Dear Reader -  A couple months back I tripped across the newly-minted Milford Public Library on one of my little buying adventures. I was looking for a ladies room, they were looking mighty clean, and so I stopped in.

Imagine my delight when the greeter in the lobby had a little sign announcing that their book sale was beginning the next Monday. Of course, I made my way back, having a blast filling bag after bag of great books - so many, in fact, that the ladies who ran the show began to get curious. They took splendid care of me - watching over my amassing books, oooing and ahhing over my finds, and finally helping me get them all out to my car. The woman who helped me cart the books finally got up the nerve to ask what I was up to, so I told her about biblion. She was tickled as all getout, and quickly told me their sale schedule for the year.

The next sale was on December 1. It offered many of their nicer books, which were priced accordingly. In fact, many were priced such that it made no sense for me to buy them (there's no way that I could sell them at any sort of margin that'd let me pay the rent). One of them was this volume on Grandma Moses by Otto Kallir: 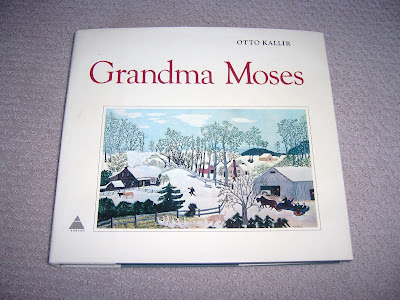 For those of you who've been paying attention, you'll recognize that it's sitting on the carpet in my office, and you'll be wondering, "But, Jen, if this book was too pricey, what's it doin' coming home with you?"

This book, dear Reader, is my Christmas present to me. I overpaid for it - as is the case with many Christmas presents - but I didn't think twice (or even one and a half times) before snatching it up from the Milford ladies.

You see, I have a thing for Grandma Moses that comes by way of my mother, Judy: 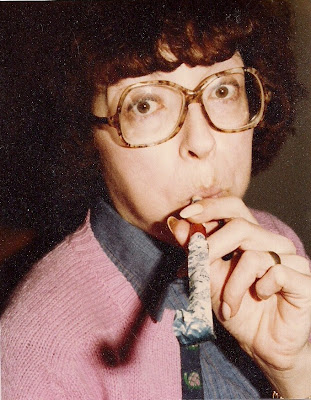 Judy had a knack for seeing people for who they are and for celebrating the best in them - in both grand and subtle ways. Take Mary and Dalene, for instance (here they all are playing dress-up one Christmas): 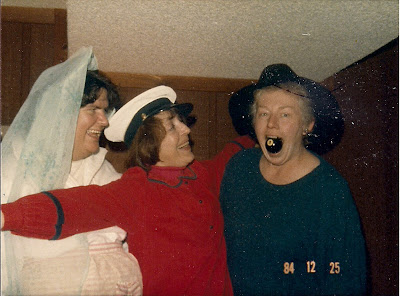 Mary and Dalene were the unique and intelligent sort of women who did not fit neatly into the box of feminine expectations in my little hometown in Kansas (Mary, in fact, weathered a horribly bigoted incident near the end of her time there that near-nigh did her in - but she, with her indomitable nature and sense of humor, prevailed). My mother, of course, loved them fully - gently turning her back to the people who eschewed them and gaining deep friendships in return that enriched her 'till the end of her days.
Judy also had a particularly keen ability to see children as people, too - appreciating the full "peopleness" of each one. Her ability here was evidenced in her community work, having lead the town's children's theater and having started the arts council with a special attention for children's offerings (she had volumes of photo albums with pictures of her plays and such - volumes which I'd love to see again [alas, see previous post re. well-meaning sister-in-law]). She was loved by my friends, as she turned the warmth of this ability on them, too - and, blessedly, she was not one of those parents who inexplicably withheld this attention from her own kids.

So it was, that one Christmas when I was a girl, I received this paperback volume from my mom: 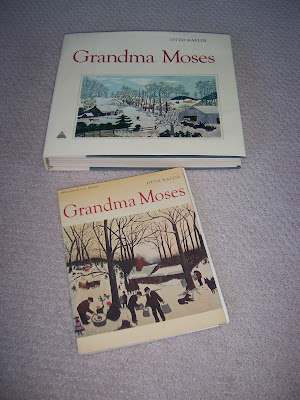 It's a much smaller, abridged version of my Milford find, and it evidences the years of living in my parents' smoking household and my hours of perusal, but I still keep it in a special spot on my bookshelf.

Why? Two reasons. When mom gave it to me she said that she'd sought it out because the detail in my drawings (I was a prolific illustrator at that time) reminded her of Moses'. That was cool, but that wasn't what really touched me. I was so moved that I'd been noticed - that I'd been seen (not always easy with the kind of attention that my brothers required). Something about my mother's gift made me feel that she knew and valued me.

To my little hands, the 9"x11" book seemed vast - seemed special. I knew I'd received something that had meaning and worth.

But little did I know at the time what worth and depth there was to the book. When I started to wend my way through Kallir's full volume, I was amazed.

The plates were stunning: 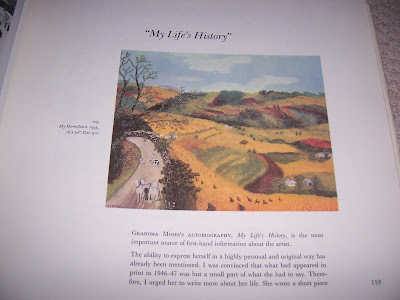 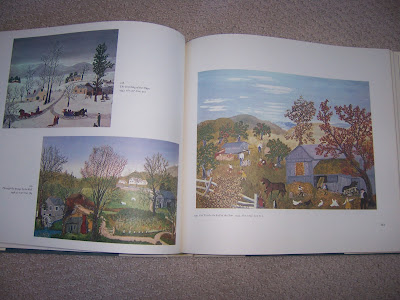 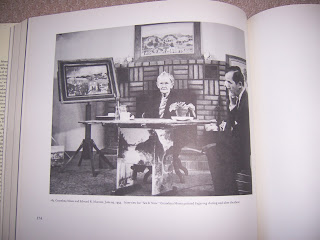 And her story so lovingly assembled, down to the gilt tables of contents for each of the book's four sections: 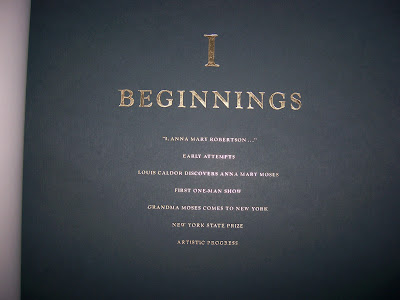 At the end there was even a catalog of her every work: 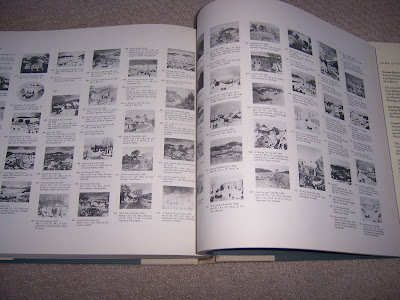 With that kind of love and attention, I just knew that there had to be a story behind the author, Otto Kallir: 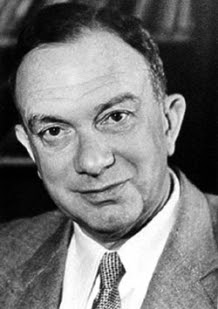 And, thanks to the wonders of Google, I found out that I was right.

Kallir was an Austrian who fled the Nazis and made his way to New York City in the late 30s. He quickly became a leading figure in the New York and American art scenes, founding Galerie St. Etienne on 57th Street and becoming key to the recovery of looted art from World War II. You can read an essay about him from their 55th anniversary. (You can also read about the sale that he was obliged to make to Hitler [from which he did not profit] back in the day here on the Looted Art website.)

St. Etienne was where Grandma Moses' work first gained national and international exposure, via the exhibition "What a Farmwife Painted" in 1940, and they went on to become her exclusive representatives. You can read more about their relationship in Otto's daughter Jane's essay from the Moses anniversary exhibition early this year.

The second reason why I've so treasured the Grandma Moses volume is something that Moses, Kallir, and my mother have in common: rebirth and reinvention. Moses and Kallir both had remarkable transformations - his rather phoenix-like, having had to abandon a successful career in Europe at the age of 45 and start over from scratch in America - her's more like a butterfly, having lived in a very different state of being for most of her days, only to be revealed in a startling new twilight.

Even as a girl, I latched on to this aspect of her story - of the fact that it's never too late for something extraordinary to manifest in our lives. And as I watched my mother navigate the challenges of her life with grace and joy - forever seeming to be able to make something beautiful out of it all, no matter what - I, too, believed that it was possible for my life to eventually amount to something positive, even if it didn't seem grand or important or relevant at the time. All it takes, I realized, is to just be fully myself (which I've since realized isn't always as easy as it sounds).

So my bookshelf has a new occupant this year, and my heart has a renewed appreciation for life's ultimate goodness and possibility - quite fitting as Miss C and I are set to embark on the next leg of our new adventure as the new year chimes in. Blessings to you and yours as you watch the clock tick down to 2011!  - Jen 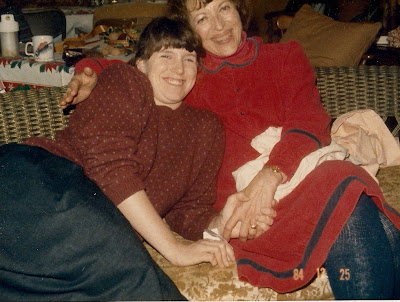 P.S. If you love a great story, you'll love this charming NY Times one about Jane Kallir's second marriage to her first husband.
Posted by Jen at 12:20 PM