Dear Reader -  Three weekends back, we'd tidied up enough to take the paper off the door: 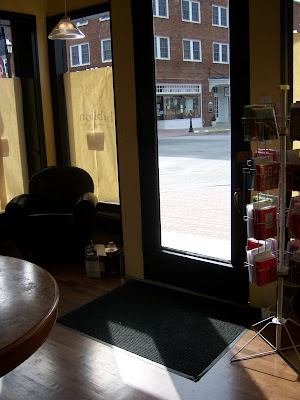 And brave folks started making their way in, having fun poking around the books and cards, picking up a few favorites in the process.

The coolest thing that happened, though, was what became of my broken, Chinese-made (I'm pretty sure, since virtually everything's Chinese-made) bookmark display: 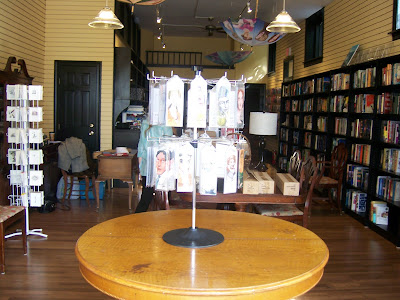 See how it has two tiers? Well, the bottom tier spins right around like a dream, but the top one couldn't spin for it's life - we tried WD-40, various positions and angles, and good ol' spit, but nothin' seemed to work. So when I walked by it on Saturday morning, I was thinking, "Man, I need to figure out something to do to fix this poor thing, 'cause I don't think it makes any sense to send it back to China."

And then, later in the day, who does one of our brave visitors turn out to be? William, the blacksmith's apprentice. Kismet: 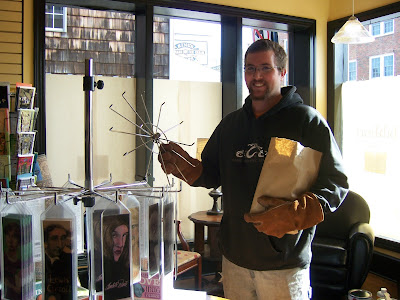 Of course, it's cool as heck that William just happened to stop in when we needed him most, but it's even cooler that we even live in a town that has it's very own blacksmith (his name is John) with his very own apprentice.

A day later, William brought back the the spinner, with both levels working in that dream-like fashion. And while I still need to stop by R&L next door to see what the beverage of choice is for the local blacksmiths, so that I can thank them properly, I did get a chance to stop by their shop at Third and Chestnut to say hello and snap a few pictures.

I'm not sure what I was expecting, dear Reader, but it wasn't this. The blacksmith's shop was a veritable candy store, with beauty and wonder in every corner, and I couldn't stop snapping pictures (while William knew well enough to chuckle at me, I think John thought I was a mite touched): 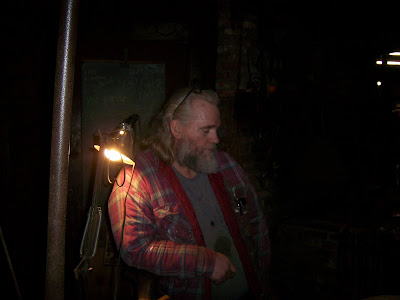 John's been at this since 1983, starting the construction of his Preservation Forge building in 1984, moving in in 1990: 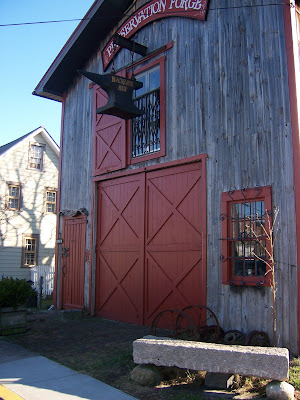 He keeps these pictures of the construction process on the wall to remind the older folks who swear they knew the building and played on the stone bench as children that it didn't exist back then: 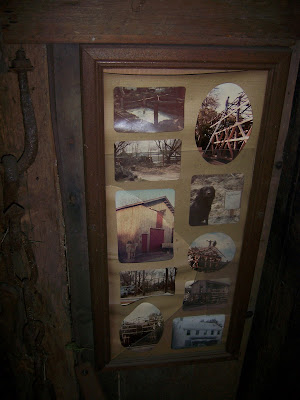 John's an artist. He'd originally envisioned the upper level of his building as a gallery, filled with his sculpture, but after he sold the one piece he had up for his grand opening, he's stayed steadily busy, selling every other piece before it's complete. John's never had to promote himself or his work, folks from all over just seem to come to him.

But just because there isn't a gallery doesn't mean that there's not art to see. Dear reader, every wall, every nook and crannie of his shop is art. Just look at this wall: 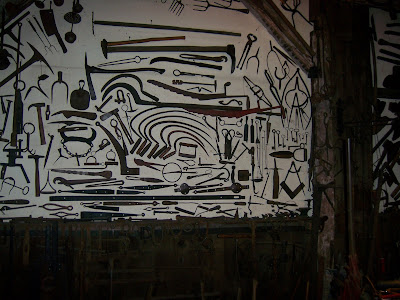 Or these pitch forks arranged above our heads (John's got a mighty big bellows there behind them, too, huh?): 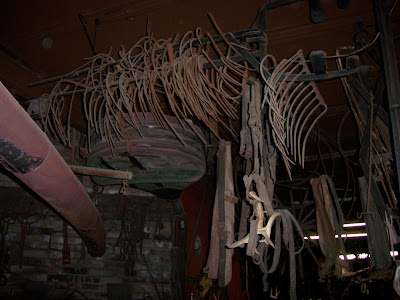 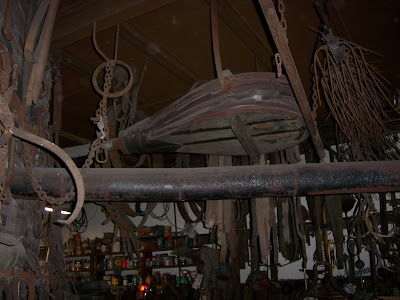 Or these nozzles (who'da ever thought of nozzles being so lovely?): 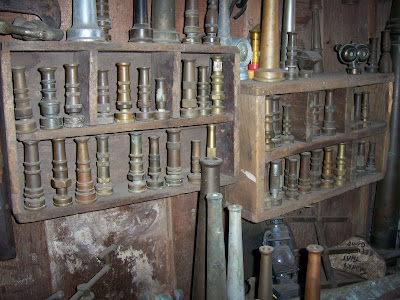 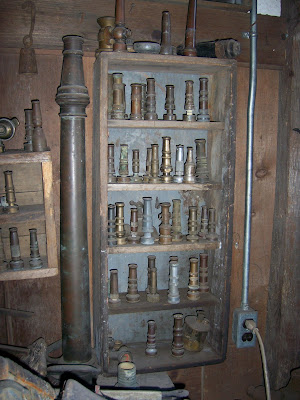 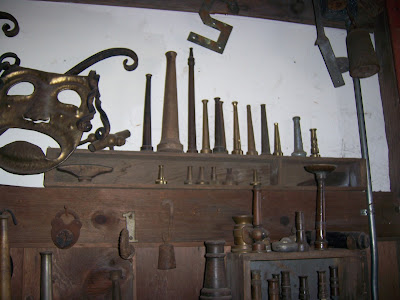 Absolutely everywhere I turned, there was a delight for the eyes. He's also collected some cool larger pieces over time, like this giant pulley and this bell and this supremely awesome square thingamabob, whatever the heck it is: 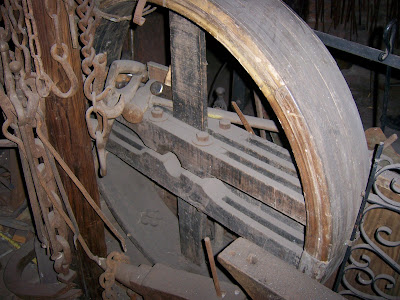 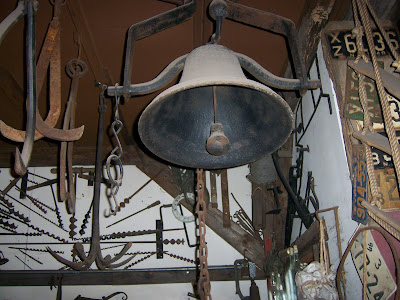 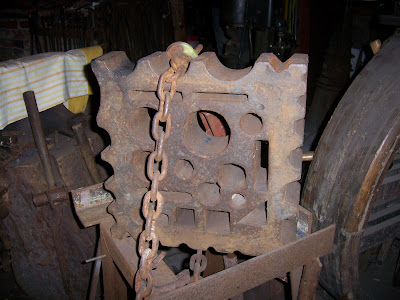 But the best was yet to come, dear Reader, for if I wasn't in love with John and William for their artistic prowess already, I soon found that they were both lovers of books. John ambled back into another room and emerged with this rare piece - a seldom-seen early book on early engines: 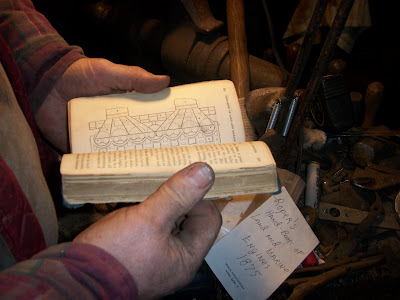 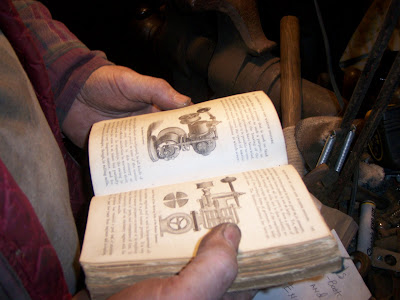 And William loves him some rare WWII volumes: 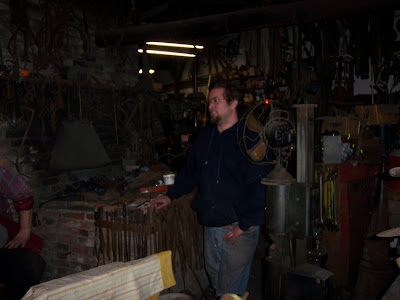 It was the end of a long day of hard work for them, so I thought I'd best skedaddle. John and William are currently working on Fish #15 (John said that since he started making fish he doesn't think he's ever gonna be able to make anything else - he just keeps getting order after order for fishes): 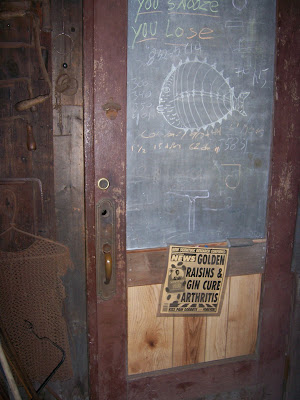 If you're interested in Fish #16, stop by when the sign's out, John and William will welcome you in: 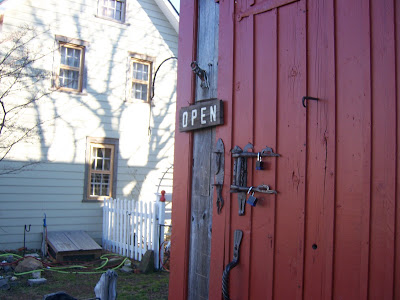 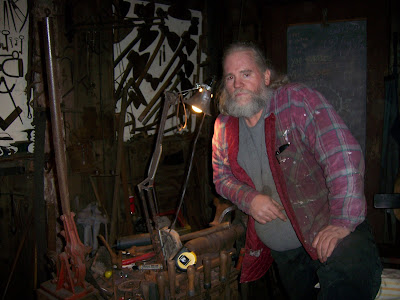 P.S. I'm a fan of the polka band, Brave Combo - an awesome group of guys from Denton, Texas, who play a mean polka, as well as an eclectic blend of Latin and rock tunage. Here's a rougher, live version of one of my faves for William and John: